← Books for guys that actually like to read: Self-Improvement
Tattoo’s, no tat you →

Danny’s sick as a Human

Oy. ‘Ello there. I’m Brody, you may have heard of me. I’m Danny’s English Staffordshire Terrier, or Staffy for short. I picked Danny when I was a wee lad of 6 weeks old. He’s was originally interested in me sister. But, she’s a proper twat and she wanted nothing to do with Danny (as is the case I believe for most lads sister’s). Just pulling yah chain, he’s a proper lad Danny. Anyway, back to the post (I think that’s what I heard him call it). Danny’s been sick as human as of late. I feel bad for him, I do. He’s been milling about watching the telly and not cooking. I must admit though, he does look shite and he’s been persistently hacking non-stop for  past 4 days. It’s like watching someone with Tuberculosis. By the time he get’s home he looks completely knackered. Poor sod.

Danny didn’t feel like blogging today so he’s sitting in front of the telly watching foxnews. I’m sure at some point he’ll end up watching travel channel or foodtv. Oh, here’s a tip: if you wanna piss of Danny mention Anthony Bourdain being a proper twat, or how Rachel Ray has the voice of song-bird. He won’t come off it. And oh for fuck’s sake if I have to watch another episode of that God awful show where those troglodytes live in the swamp and hunt crocs (yeah I know they’re alligator’s, but this is my personal rebellion against me master…leave it be) for a spell. I can’t believe he claims to have family similar to these tossers. *fake american accent* “Troy sounds like my uncle Al out in Donaldsonville.” *smh* It’s fuck all really, but I guess it’s a big deal for him. I think I’d rather have a claim to fame of coming in 4th place in a Special Olympics 100 yard dash than be associated with that sort. SHITE, i wanted to run this by you since i can’t really discuss it with Danny.

Right, so I’m working on this screenplay. Just suspend disbelief for a moment and go with me. The protagonist is a man with asymptomatic narcolepsy and lives in a state of constant dread not being able to discern his reality from what could possibly be a dream. Fucking brilliant right? I think so, I mean think about it; you’re at work and banging out a major project. Boss is riding your bollocks and you of course bang it out like a fucking champ….or did you? Maybe you’re just dreaming it. Maybe you’re shagging this gorgeous bird but the reality is, you nodded off while having a wank without realizing it. How much of a mind fuck would that be? I was thinking of piecing together a series of dark vignettes; think Gaspar Noe doing Memento. Honestly, who didn’t like Momento? You’re a fucking daft cunt if you didn’t. Oh, sorry about that. I keep forgetting how touchy you Yanks are about the word cunt. Sorry, I’m English and cunt is a proper word. Danny know’s some Irish sod of a bar-keep and they use it often. I think you Yanks would do right by using cunt more often. I mean, you can’t really call your women bitches anymore can yah. Well, call her cunt and watch the show. Brilliant.

Right so I guess this is the part where I embarrass Danny since he’s got a head full of Nyquil and he’s in a drooling stupor like some Liverpool fan-boy cunt. Alright what to tell you……AH. Danny farts a lot. He does, and it’s dreadfully awful. He acts all proud of it and all, but he’s secretly ashamed of its putrid lethality. Look I’m a dog, and you know what that means, it means I have an olfactory level 50 times greater than you humans. Adds up Danny’s farts being fucking blindingly awful. Oh, Danny doesn’t know this, so keep mum: his family calls it “Danny’s weapon of ass destruction”. Brilliant right? His cousin Cherie came up it, she’s a good bird she is…although a tad ditzy. What’s truly despicable about Danny’s arse is that he’s ninja about it. He can blow dirt then leave a room and it’ll be 2-3 minutes before you realize what he did. And, it’ll linger for 10 minutes (I think you Yank’s call it hang-time). I don’t know whether to marvel at it or have someone kick me in the nose. That’s my Human, I guess and I’m stuck with him I suppose. Ok, what else about Danny: OY!!!! Don’t buy off on boyo acting like this tough-guy hooligan, he’s a fucking baby. Seriously. He get’s his feelings hurt over the most inane shite. Next time he’s at work, I might have to jump onto google and research bi-polar disorder. Mental note made. Oh; you wanna piss off Danny, tell him Joy Division did nothing to influence alternative music and how unimportant The Smiths were. He’ll go bonkers, and I’ll have a proper giggle.

Ok, he’s proper fucked now. I think the Nyquil finally gave him a good kicking, I think I’ll go sit next to him and lick his stomach (he hates when I do that) while he’s semiconscious. You should see him, his glasses broke so he’s been having to wear those God awful BCG’s (those are those hideous military issue glasses) that make him look like he should  be chained in a lab working on quantum string theory or drawing up schematics for a flux-capacitor. Seriously, he looks like a proper twat. What can I say….that’s my Human.

So this is what it’s like to try this blogging nonsense Danny keeps prattling on about. I really don’t see the big deal. If you guys would do me a favor, please tell this sod to get off his arse and take me to the beach so I can pull some birds for him to snog. All he does is watch travel channel, food tv, nat-geo, and history channel. Lad’s never gonna land a shag like that. It’s a shame inn’it. So get on with it, will you. Cheers.

[edit- since the little shit took it upon himself to jump on my blog, i decided it was time for some payback. he WILL NOT like the fact that i shared these awful pictures of him. you brought down the thunder Boy.]

the day i brought him home. Brody at 6 weeks.

i went home for christmas and left Brody with So-So. she then posted THIS on my FB. she suffered a LONG and SLOW death when i got home. look at his face, that is the look of pure.pain. 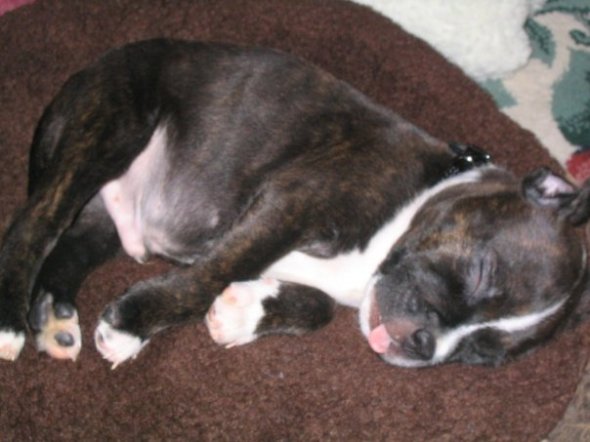 6 weeks old. look at that belly and that tongue. lol. he HATES this pic btw. you can go ahead and mop your heart up off the floor, since i know it melted.

21 Comments on “Danny’s sick as a Human”