i just finished watching the “stars earn stripes” finale. well, before i had seen the finale i had only seen the first episode. i kind of liked it. so when i noticed the finale was on me and the Gutierrez clan watched it. honest to God, had my family not been into it, i’d have turned it off. half way through, i KNEW it was going to come down to 2 women. i KNEW the guys wouldn’t qual out.

for those of you that don’t know, the show takes TV celebrities and teams them up with SPECOPS guys to train for military style missions. each mission they accomplish, they “earn stripes” and $$$$$ to donate to a military charity. cool.
well, it DID in fact come down to 2 women.
now………this is where i got peeved: we all know how biased the MSM is. well, what you civilians DON’T know is that there is a HUUUUUGE push to get females into the infantry. all i could think while watching the show was how much of this is a dog and pony show to “prove” that women could hack it in combat. one thing i noticed was that the guys did ALL the physical shit on par with the SPECOPS guys, the women COULDN’T. the guys could have sandbagged the physical crap but they kept up. BUT, the guys got DQ’d on SHOOTING. and both girl’s were OBVIOUSLY struggling with some of the more physical tasks. the SPECOPS guys basically pulled them over the obstacles. watching the guys get booted seemed VERY scripted.
let me tell you something- i’m NOT a big guy. i’m 5’4″ and weigh 130 lbs. in full gear i have an extra 100 lbs PLUS medical supplies (i’m smart though, i divvy it up among my guys). humping and having to drag a Marine in full gear is a BITCH. i’m not saying there aren’t women that couldn’t cut it; but the infantry is NOT a social experiment. and the show left me thinking it was just another MSM feminist “girls can do anything men can do” advert.
fuck that show. 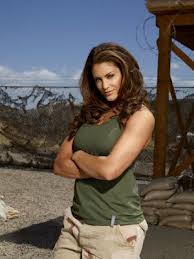 eve torres of WWE. one of the finalists. i KNOW she hooked up with the guy she was teamed up with. 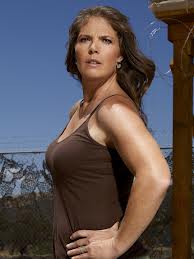 another finalist. she’s a figure skater.