i’ve always said relationship maintenance to be to say yes to 90% of the shit she wants to do. seriously. there will eventually come a time where you absolutely DO NOT want to go along with something. your ability to get out of said event is the ration of yes’s to no’s. i mean let’s face it, most of the shit she wants to do is pretty inane anyway. it’s best to go along with it and save it for a “veto”. and women WILL allow the veto when they know you’re usually compliant with what she wants.

it was date number 1. i took her out to see the city. the only thing she knew about the city was bourbon street. i was out to change all that. it had gotten to the point i had run out of she to do, but we both agreed we didn’t want the date to end. she suggested we go see a movie. i agreed. we were at a coffee-house looking over a paper and she excitedly ask if we could see “Crossroads”. i didn’t bat an eye and immediately replied, “sure.” 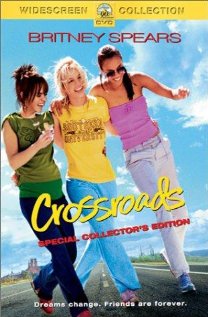 yes i agreed enthusiastically to watch this.

i was telling this story to my coworkers the following monday. and when i got to part about saying yes to the movie, all the girls gave a collective, “NOOOOOOOOOO!!!!! OMG Danny you DIDN’T.” my boy’s Dinsley and Allen jumped to my rescue.

” MAAAAAAN, Danny took an L to get a W. he saw that light at the end of the tunnel. so….how’d the date end.”

i smiled and said, “we didn’t make it to the movie, and i ended up making her breakfast.”

fast forward to 2005. i had been dating girl for a minute. i had actually broken up with her and we’d gotten back together. i had MUCH more game then. i did 90% of what she wanted to do, and one afternoon she asked me if i wanted to watch some movie with “shark boy” in the title. i asked her what it was about and replied, “yeah i’m gonna have to exercise my veto on this one”. we ended up going to the base, she met up with her bestie, and i went to starbuck’s and read “heart of darkness”.

yeah. THIS is what she wanted me to watch. uuuuh….no.

but i think the best thing i can think of was my boy deciding he was going to start on cigars. he had been married for about 4-5 years. they actually were a model for me that marriage can actually be a good thing. his wife was fucking dead cool. and my boy, like me, is half mexican. well his golf buddies all had cigars and he decided to take them up. his wife told him, “NO.” my boy, looked at his wife and said firmly, “no….you don’t get it, i WILL be doing this.” she conceded and insisted she would not allow it in the house. my buddy, being a smart and reasonable guy- agreed. that excited the shit out me since i was already a cigar nut. lol.

so guys, be easy, go along for the ride and at some point she’s gonna steer you in a direction you just don’t want to go. well, if you’re constantly shutting her down, eventually she’ll push you away. so say yes and throw down your “veto” when appropriate. if she gives you shit, you may want to reconsider the nature of your relationship.