← ITLR- Posting Openly and Closing Secretly
On Being Excellent →

Sometimes I need a break from this whole “game” thing. But I have other drats in the works, so don’t worry. But read the tag line. consider this a “horseshit” post. Don’t like, go to wordpress.com and start your own damn blog. lol.

Ever since I was a kid, I’ve been a horror movie junkie. They are the only DVD’s I HAVEN’T gotten rid of. When I initially heard of the “Evil Dead” remake, I was nauseous. THEN I learned Sam Raimi and Bruce Campbell were producing it. For those of you that don’t know. These 2 are the original members of the first Evil Dead.

In 1979 Raimi and some actors from University of Michigan set out to a cabin in Tennessee to film a shoestring budget horror movie (they had $375,000). Raimi wanted to make an over the top horror film, that was loosely based on his college short “Within the Woods”. Evil Dead became a cult classic and any so-called fan of horror movies will have Evil Dead in its top 10 faves. The movie was known for its over the top gore and in your face train wreck action.

The remake I learned wasn’t as much a “remake” as it is a sequel. The movie is directed by Fede Alvarez and takes place 30 years after the original. The premise is 3 kids head to the remote cabin to wean Mia off of heroin. They are surprised by the arrival of Mia’s brother and girlfriend. There’s a bit of tension as her brother left the family and wasn’t there for the death of their mother, who died in a mental facility.

One of the friends is an RN and will be supervising the affair. David (Mia’s brother) is warned that she’s died once before from an overdose and that her last attempt at rehab went poorly and she left before treatment could be finished. He’s warned that she will say ANYTHING to leave once the with drawl starts.

Well, Mia starts complaining of an awful smell in the house. Finally the dog starts pawing a rug which reveals a door to a cellar. There’s blood by the cellar. Once they open the door there’s a disgusting smell emanating from the cellar. Come to find out there are dead animals hanging from the ceiling. And a book wrapped in plastic and bound in barbed wire is on a table in the corner.

Mia meanwhile is pacing outside in the rain as her with drawl gets worse. Eric (one of the friends that brought Mia to the cabin) decides to open the book. Despite several warnings to NOT read or recite anything in the book- Eric decided “fuck it”, and recites a passage that releases a demonic force. As Mia paces in the woods she sees a ragged young girl staring at her.

She runs in the house and tells her brother to get her out of there. Everyone agrees that she needs to stay, and she ends up in her room. She steals a pair of car keys and drives off, but she sees the young girls in the road, and crashes the car. An unseen force chases Mia and she trips and falls into a group of vines that begin binding her.

That’s all I’m going to give about the plot, but essentially there’s a demonic force that needs to claim 5 souls before it can manifest on earth. I like the fact that you get 15-20 minutes of getting to know the characters before it gets grim. And BOY does it get grim. This is not your standard “shit pops out at you and scares you suddenly”, this is pure pedal to the metal, in your face, over the top gore. I was one of the only people in the theater laughing during certain scenes. 2 waitress’ at my local couldn’t even make it through the trailer I posted. There’s little to no CGI, and the film itself looks VERY realistic for whats going on.

If you have a weak constitution, you might want to skip this one. There is no humor, no silliness, and no camp. There are a few references to the original evil dead, but I won’t spoil it for you. If you’re a fan, you’ll know them when you see them. I watched the original a few days ago as I thought this was a remake, but this is NOTHING like the original, so there’s no need to watch the original unless you want to watch a great old-school horror film.

It was announced that there will also be remakes of Evil Dead 2 and Army of Darkness. And do yourself a favor if you ARE a fan of the original- stay until the end of the credits. 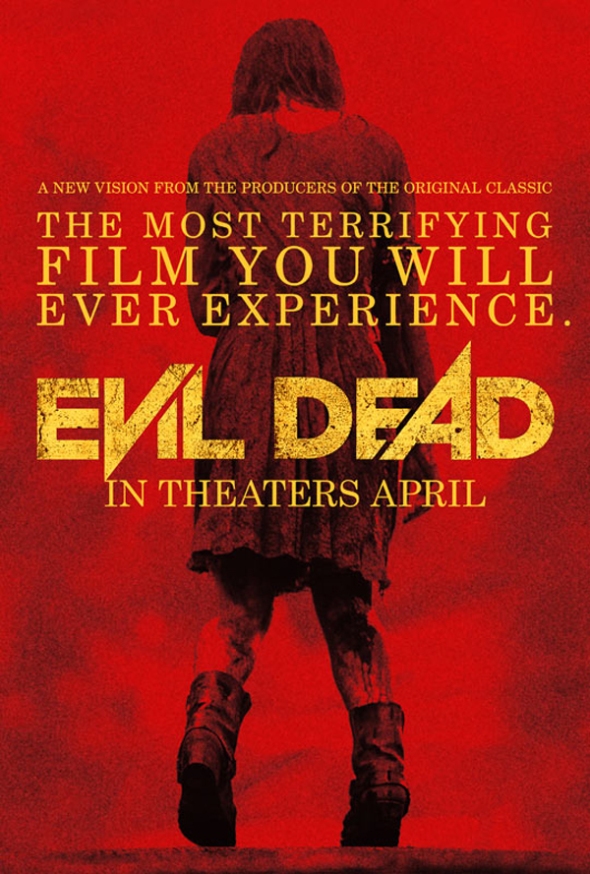 this clip scared the shit out of a few of the waitress’ at my local. the final scene is BRUTAL.