As a follow up to last night post debacle, I wanted to discuss ANOTHER weapon in my arsenal:

I’m sure we all know you ladies lose it over a man that has a dog. Hell, I’ve even covered dog game before. When a man displays the abiliy to keep something alive, love and be affectionate (and let’s face it, I get all lubby dubby when it comes to Brody) women take notice. But just having a dog isn’t enough as far as I’m concerned. No. having a TRAINED dog, now that makes a woman melt. Especially when they learned YOU trained him. I also covered this
here. That tells a woman she is in the comopany of a man worth seeing her naked. She’s dealing with a man who knows how to take the lead, and be a good Captain.

Brody isn’t some trained buffon (ok, he IS a buffoon, more on that later), but he is also well versed in: sit, stay, down, come, move, and shake. Having a dog trained, that listens to and follows your command is some alpha tingle heroin to women. The first thing a girl that Brody pulled, and trust me- BRODY pulled her- not me, says is, “OMG he’s so well bahaved.” Then he’ll get over excited and pee, which AGAIN makes girls gush. But Brody’s specialty is his grand finale (video at end).

But the thing is, Brody- like his Papa, is a fucking goofball. I SWEAR to you. Everyone that’s met Brody has noticed how much of a cornball he his. If he’s sitting down next to me, he’ll frequently turn around and smack his head on the coffee table. I’ll make a comment on it about him being a dummy and he’ll flash this look that says, “What?” He’s ALWAYS smacking his head on something. Or he’ll be lying down watching TV with me when he’ll suddenly jump up and excitedly chase his tail. Or, she shake his ass side to side and whip his head around and try to bite it. He’ll do this for 2-3 minutes at a time. That or he’ll do the same motion but do it lying down (that one’s a GEM). And despite what anyone may tell you, you CAN tell when a dog is happy and knows when he’s been scolded. Brody smiles. Seriously. His eyes will light up and his tails goes nuts. When I scold him, he drops his head, his eyes show disappointment and he’ll sulk for a moment.

When I adress what a goofball he is he’ll give me the same “What?” look. PRICELESS. Brody is an English Staffordshire Bull Terrier. He’s 40 lbs of solid muscle and teeth. Staffies have HUGE, toothy mouths. Once I’ve confirmed you’re cool, he’ll lick you incessantly and run around you. If you are NOT someone that’s supposed to be in my house, he’s 40 lbs or teeth and fearless fury. And he’s VERY protective of women and kids.

So-so dog sat for me when I went to NO and she said his ability to just bark like a maniac if someone came close to the house made her feel 100% secure. And she KNEW if anyone broke in they’d have to get past Brody to get to her. Though he’s not big, you wouldn’t want to tangle with a dog bred to bait bulls and bears. Staffies are IMHO the best breed of dog for a family. They compact (read- don’t eat too much), energetic but not in the spastic meth’d out beagle type of energy. They’re not attack dogs, but will defend you and warn you if someone comes around. Though small the bark sounds very intimidating. If you’re chilling, they chill. If you wanna take them on a run with you, they’re down. And they aren’t known for being axcessive barkers, unless to warn you. But-

And anyone that’s ever owned or been around a Staffie will tell you they have very unique personalities. And Brody’s is, well……….he’s a fucking dork. But he’s a lovable Dork. And he’s MY dork. Lol. And as I proved last night women LOVE them a goofy lummox.

tell me this dog isn’t happy as all hell. Brody smiles JUST like this. lol. 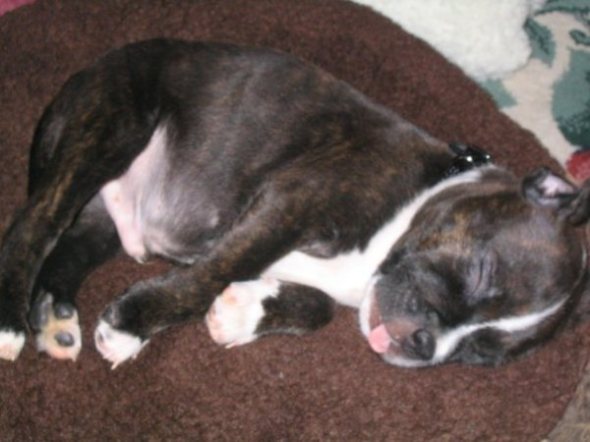 dead to the world. look at that belly. Brody 7 weeks old.

the day i got him home.