if you don’t want to read the site, i’ll just give you story below.

cameron diaz from “in touch magazine”.

“At a party in New York’s Hamptons on July 27, Cameron was overheard complaining about not being able to find a good guy and asking happily married Kelly Ripa to play matchmaker.

“Cameron told Kelly she’s desperate for a boyfriend,” a witness reveals to In Touch. “She wants Kelly to line her up some dates. Cam told Kelly to set her up with hot, athletic guys. She told Kelly she misses being in a relationship and always ends up being attracted to guys who won’t settle down.” [emphasis mine]

the author of the then goes on to say:

“Poor thing, that Cameron Diaz. She waited until after her “Use By” date expired, and now she has to beg her friends to hook her up with mercy dates. I blame Jennifer Aniston for raising the hopes of senior citizens everywhere, quite frankly. Jennifer has been telling women of the world that settling down after 40 is perfectly acceptable (she just “accidentally” forgot to throw in the part where you need to look like Jennifer Aniston to pull it off). Cam’s home is empty so maybe she can fill it with cats . . . or better yet, turn it into a daycare center. She can watch children play while she laments the barren wasteland of a womb she needlessly hangs onto . . . wow, that was mean, even for me. Sorry Cameron, we’ll hug it out later”

yeah, poor cameron. she used to be a model, remember her in the mask? i do, and she was slamming. but time is indeed an evil, cruel bitch to women. here’s cameron back when was just modelling. 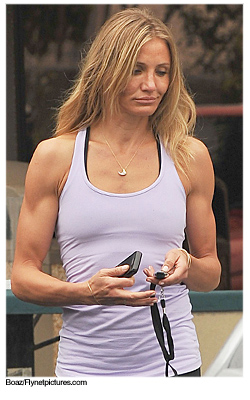 i read this on one of the sites i read that likes to poke fun at celebrities.

she even dated alex rodriguez for a while making her vagina a virtual pitri dish. i know what you’re thinking; the poor girl just wants to settle down, but i remember reading this. notice the date of the article- jan 2011. so basically now that she’s done FedEx’ing the pu-na-ni via flying to see guys for sex or flying them in for sex with her, men with “options” should pony right up and commit to her. she even goes so far as to ask specifically for “hot, athletic guys”, and complains she always ends up with guys that don’t want to commit.

like i told a woman at my local who was trying to flirt with me and bragging about “what she could do to me”, i simply replied, “why do i want to drive a 1992 civic, when i can drive a porsche with less that 10,00 miles on it that still has that ‘new car’ smell to it.” OOOOOH the evil look i got, but the stiffled chuckles from a few of the other patrons that over heard was worth it. i was talking to a waitress friend- hard 6, about 22 and she abruptly turned and walked away to laugh.

aaaaah, the sweet smell of victory.

want to see exhibit B? sure….

here she is now. she almost looks plastic.

of course, she managed to steal brad pitt away from jennifer aniston, so obviously some women have ZERO problem moving in on another woman’s man IF he is of high or higher status than herself. and let’s be honest, most women would do damn near anything to win over brad pitt.

so like i said before guys. learn game early, take your lumps in your 20’s, and by the time you hit 30- women will be a non-issue as you’ll just be entering your “prime time” years of HV in the SMP.