haven’t been to my local strip club in a while. it went thug. when i get patted down and have the wand passed over me, but watch 3 guys with dread locks and pants hanging off thier ass walk right in; FUCK THAT. if shit pops off i’m not gonna be there just holding my dick. therefore, i quit going.

found out my friend (who reads and comments here BTW) works a day set 2-7. so i had some mexican grub and decided to go say hello. well, it was a whole different scene. no security, the girls were pretty cute, and my girl was behind the booth. well, stripper game is second nature to me, and DJ Lynn wings like a fucking champ.

i went behind the booth, gave her hug and she walked me to the bar to introduce me to the daytime bartender. just as a frame of reference, most strip clubs over charge on booze; well a beer at my strip club is $2.75. YEAH. i tipped her well (ALWAYS take care of the bartender), and we we went back to the booth.

eventually, one of the girls came to the booth and Lynn introduced me. she always refers to me as, “Son”. seriously. i always call her, “Mom.” so girls steps up and Lyn introduced me. i talked with her for about 2 minutes and eventually she went about her business. soon, same girl went on stage. but one thing i noticed.

there was a dude that kept staring my way. didn’t really get it, but he’d keep looking over towards the booth. hmmmm.

so girls hits the stage and i tell Lynn i’m going to see what’s up with girl. i took a chair and sat leaning back, right arm draping the side of the stage and my left hand with my thump in the pocket and my fingers just above my mule. classic alpha position. well, as girls dancing, dude that kept looking my way steps up to the stage and once girl saw him and went over to him, he did the “make it rain” bullshit with what was about $8. he looked at me, and walked back to his spot at the bar.

i was fucking dying with laughter.

girls finally comes my way, and i’m a complete dork. i bob my head side-to-side and when she does something sexy, i’ll smile REALLY big and hop up and down in my seat. strip-club secret- if you can make a stripper break character and start laughing and telling you how cute you are, you’re winning. i gave her $2 and went back to the booth.

after her set she went to “make it rain” dude and thanked him. typical. then she came up to me and thanked me. after she hugged me, i told her, “sweetie, smash your titties into my chest again please.” she anxiously threw her arms around me and said, “they’re firm.” i asked if she had work done and she repeated that they were firm. i asked her how big she was and she touched my chest and told me i have more meat than she did.

“really, let me see.” i should note that i was already feeling her tits and she was leaning in as i did so. she said she wasn’t allowed to flash and Lynn jumped in like a pro, “there’s no camera here, you’re safe.” girl stuttered a moment, and i asked again, “c’mon, it’s no big deal, let’s see the work.” she stepped back and said she needed to go to the bathroom.

this was NOT a failure. she lost her nerve. i took her out of her game. she’s used to being in charge, and she lost control with me, i kept the frame and had the DJ backing me up. told you she wings like a champ. but it get’s better.

next thing i know she was sitting next to “make it rain” guy. fucking perfect. she stayed right next to him and was working on a VIP. then i notice and VERY cute raven haired lovely. i asked about her and Lynn just said she thinks her shit doesn’t stink.

girl managed to get 2 VIP’s before she took the stage. well, prior to that Lynn told me to head over and tip a friend of her with MASSIVE tits (obviously fake). she was also a tad older than i prefer, but whatever. i tipped her $2 and went back to the booth. girl came over and ended up nuzzling next to me for about 10 minutes. which was fine since i got to squeeze some titty meat.

eventually the black haired girl took the stage and had to see what was up with this girl. i sat at my stage seat (i always sit in the same spot when i go to the stage), and girl approached me. she sat across my lap and she asked if i’ve ever been there before. i told her i was friends with Lynn, and i used to frequent a lot. then told her i though she was cute so i decided to come visit her. then i commented on her being quite the little hustler. she looked puzzled so i told her i noticed the VIP’s. she giggled and said she didn’t know what i was talking about, she was just doing her job. i put my finger under her chin, pulled her face close to mine and said, “that’s exactly what a hustler would say.” then i winked at her. she was smiling from ear to ear.

i went back to the booth and told Lynn, “i could fuck her and her (referring to the “firm tits” girl and black haired girl). Lynn nodded, “oh yeah, of course.” i told her, “that girl (black haired) is as transparent and easy to read as a paper.total narcissist. i made it a point to smash her pedestal and called her “cute”, and when i said it she gave me an “off” look. THAT’S when you know you have a pretty girl of her game.

i have a new project. i’m guessing the “firm tits” girl will be easiest to close, so i’ll start there. the raven locked lass will probably be a tad more difficult, but i’m not disqualified as a fuck in her eyes. i assume her flake factor will be through the roof. but, i’m also working on a 19yo waitress at my local.

so, for the record, i have 2 girls in the stable here in jax that i see about once a month. i’m currently working on: a waitress at my local, and have taken on running the 2 strippers i mentioned above. abundance KILLS fear and self-doubt. it’s not about the close for me, i prefer the chase. once i close, my interest wanes to a stand-still.

it’s basically a hunter’s mentality. on another front.

i JUST got my paint-ball mask today. a few of my Marines/Marine HM buddies do some pretty balls-out paint ball fights and i decided to get a decent mask for the party. 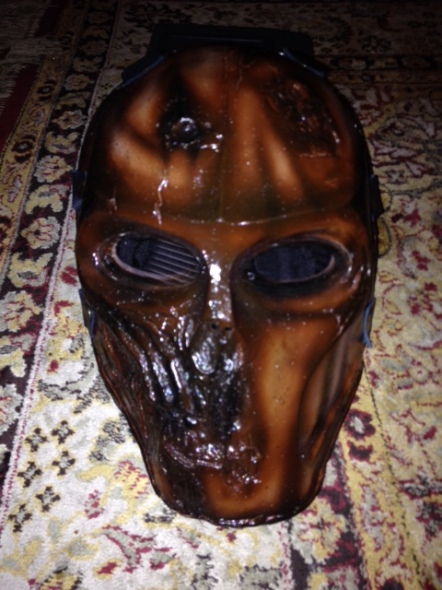 i’ll be getting another one. but i picked this since it blends well with the forest. i just need to drill a few holes onto the mouth.