← The Boys of the Green Mailbox
ITLR: Kill Football →

i was waiting for today since this weeks parade schedules and other events will be out and i can make some loose plans. it’s a bigger group this year, so i’ll be stretched pretty thin. however i will do my best to accommodate any requests. so if i say i can’t, you’ll know why.

first: if you’ve never been to NO, i suggest you read my Guide first. both are applicable as we’ll be in downtown for the Quarter and Uptown for the parades.

Weather- days will be mild, evenings CAN be chilly, but nothing too serious. a light jacket should be all you guys need. women, i’m usually ok in capris so long as i have a decent jack….wait what. there will be rain friday, but days will be 60’s and night lows will 55-47 (fri-tue). a light jacket should be perfect. bring shoes you are going to be comfortable in, you’re going to be doing a LOT of standing.

everyone- wear shoes you don’t mind getting dirty.

Arrival- if you’re flying in and i don’t have your number, email me so you can give it to me. let me know when you plan on coming in as if i have 2-3 people arriving around the same time, i can bring my mom’s van and make one trip vs. 3-4. mom lives about 15 minutes from the airport. we will be staying at mom’s until around 8-9, earlier if no one else is coming in. the hotel is a good 30-45 minute from from my mom’s and it will be during the busiest time of the year. i MIGHT have to make 2 trips. if you decide you’d rather take a cab, that’s all you. if you cab it, tell the driver to go to NO east and use I-610 (it’s a short cut) and you’ll save money.

Activities- tentative. but expect wednesday to to be a throwaway until we get everyone settled. if you want to take a cab into the quarter, that’s on you as i can assure you the place will be going off all night. bars do not close in NO.

Thurs- Krewe of Babylon/Muses- UPT. my little sister is going to this parade, so we’ll be attending as well. we’ll try and get there around 3pm so we can park, and do a little exploring. once parked, we’re good. i expect to be there until about 2 maybe 3 hours. after the parade, might as well stay UPT for a while as the parade ends on canal and the traffic after a parade is retarded. i was thinking of going to parasol’s for some grub and a few drinks. from there, we can plan out the rest of the evening. we’ll be close to snake and Jakes as well and you guys are REALLY gonna like that place.

Fri- Krewe of Heremes/D’Etat/Morpheus- 6pm UPT. don’t think Sis is gonna be there but her pad is walking distance. we’ll see.

Sat- Mother Fucking Endymion. THE PARADE. the grand daddy super-parade of the city. starts at 4pm. we need to set up camp around 1, which means leaving around 11-12. i shit you not. we WILL need to make a camp like setting with chairs, blankets, ice chests, etc. once set up 2-3 people need to be on site to keep someone from encroaching. it gets THAT big. i shit you not. i usually set up on north carralton. canal street is too insane. after the parade, i was thinking maybe the quarter.

Sun- rest. sleep in, we’ll grab lunch at mom’s. red beans and rice and i think Dad’s making ribs. you’ll need to recharge for mon/tues- TRUST ME. but Krewe of Bacchus rolls at 5:15 by sister’s place. if you guys are up for it, we can go, but i’d suggest going home and taking it easy that evening. possibly dinner after the parade and just kicking back.

Mon- Lundi Gras. HUGE party day. this will be a long day and night. start the day fucking around in the quarter for a few hours and around 5, the Krewe of Proteus rolls followed by Orpheus. we don’t HAVE to go all the way to where my sister lives, but we can hike up N.Peters to get set up somewhere on the ass end of st. charles. i was thinking gravier or common st. we’ll see.

after that, we’ll assess how everyone feels. some may be tired, some may want to continue to rage. even when i was in my mid-20’s by the end of the parade i was ready to bag it. you’ll be craving a shower, some grub and a liver transplant.

Tues- Mardi Gras. the big day. i will be heading bad to Florida tues around 3pm. Sorry. but starting at 8am Krewe of Zulu (one of the original Krewes) heads out followed by Rex (the parade of parades, the original Mardi Gras Day Parade) followed by Elks then Crescent City. i’m not sure if it’s 10pm or midnight, but the NOPD shuts the city down at one of those times.

to read about the themes/history of any of the parades, check out nola.com’s official guide.

again, this a tentative schedule and subject to change. in all honesty, after you’ve 1-2 parades, you kinda get, “hey let’s do something else”. if that’s the case, i have quite a few suggestions.

now. i want everyone coming to listen very carefully to me. i’m going to do my best to ensure everyone has a great time, but let me say this- if you get out of line and draw the attention of the NOPD, you’re on your own. make no mistake, the city wants people to enjoy themselves, but if a cop stops you and decide to get into “civil discourse anti-police” shit. you’re going to jail and no one will hear from you for about a month. whatever NOPD asks you to do, “yes officer” is always the best answer. in the quarter, they tend to be more lax, especially in regards to nudity.

that’s not an exaggeration. if i tell you NOT to do something, don’t do it. common offenses.

-genital flashing (ESPECIALLY UPTOWN). uptown is more a family environment. the police can also monitor it better since all the nut jobs are in the quarter.

-excessive public drunkenness. and they know when you’re hammered. you WILL go to the tank.

-fighting. both parties are arrested unless there is a CLEAR case of self defense. but even in self defense, if you’re high or really drunk- bye-bye.

so please enjoy yourself and i tell you not to do something, jus quit doing it. if you don’t listen, there could be some consequences. looking forward to seeing everyone. 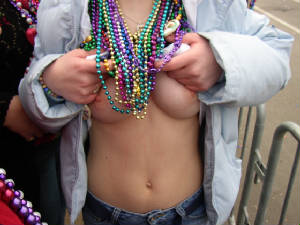